SECURITY IN ALL CASES

Secure multiple drawers with just one lock? No problem, with the interlock systems from LEHMANN. These systems offer interlock anti-tilt security for drawers-prevention of simultaneous opening of several drawers, as it is required for office pedestals or lateral file-cabinets.

One would assume that home furniture is not dangerous and that furniture in your
home is not a source of serious injury. Unfortunately, this is often not the
case. Again and again there are reports of people being injured – sometimes
fatally – in their own homes by drawer units tipping over. Children are
especially at risk. This raises the question of whether an advisory note
warning of the possible danger or recommending adequate fixation to the wall is
sufficient – especially as there are technical solutions which can
significantly improve the stability of drawer units.

The scenario is shocking, indeed horrifying: playing children (inquisitive and adventurous by nature) who open one drawer after another of a drawer unit… or use open drawers as a step ladder to explore the top of the unit or see the world from a different viewpoint. This can lead to a heavily laden  drawer unit tipping over and – in the worst case – burying the child underneath it. Of course it can be argued that playing children should be supervised, but the reality is that children cannot be supervised permanently around the clock – and we all know it. 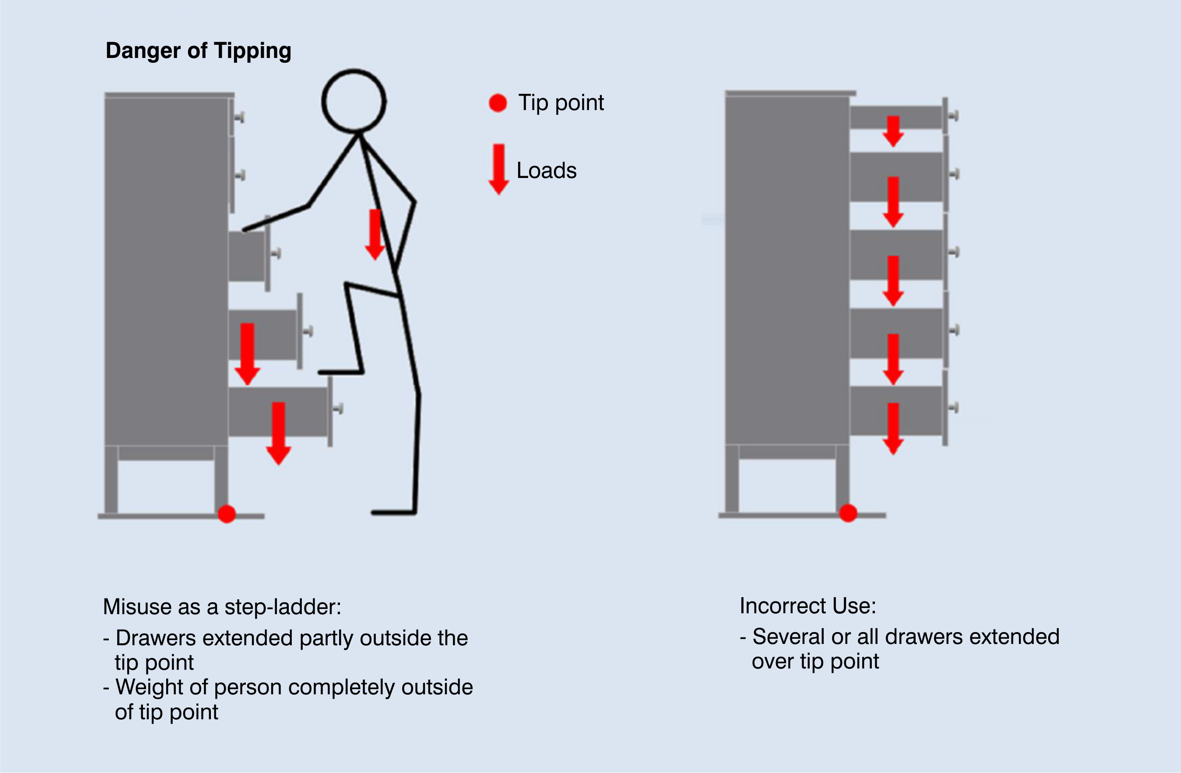 In The office furniture industry has long been aware of the risk of tipping cabinets
and for decades has installed anti-tilt systems as a standard feature to
minimize the danger to office workers. Initially, simple anti-tilt devices
where used to prevent multiple drawers being opened one after the other,
however these devices were not entirely fool-proof and it was possible to override
them by opening drawers simultaneously. With the introduction of SVS3, LEHMANN
introduced interlock anti-tilt security, effectively preventing simultaneous
opening of drawers and perfecting anti-tilt security.

What are the benefits of the SVS3 anti-tilt system?

Anti-tilt Systems: how much is child security worth

SVS3 of course adds some cost to a drawer unit; however, due to large-scale production volume and efficient production processes, the cost is acceptable in comparison with the benefits of the system. SVS3 can also be customized to suit the individual cabinet specification and LEHMANN offer technical support service (based on exchange of CAD data) to assist furniture manufacturers integrate SVS3 into their drawer units.